There were fourteen sailors out racing on Feb 11th and they were rewarded with a beautiful day for sailing.  Winds were a consistent 8 – 10 knots and temps in the high 70’s.  It’s fantastic to see many new names on the score sheet this year.  On the course were three JY 15’s, three Hunter 140’s and one Sidewinder.  Yet another day ended up with a tie in total points for A Fleet, leaving the pair of firsts earned by Kurt and Gordon to break the tie for the day.  In B Fleet we’ve got a couple rookies fighting for their place in the top three of 2018.  Overall and very exciting day of sailing.  Next race is March 11th.

January’s race had great weather.  Wind around 8 knots and the sun warmed up the cold air for just enough time that everyone was comfortable.  We had the usual suspects on top of A Fleet and some new comers for B Fleet.

That little cold snap we had towards the end of October had me a bit worried about the Fun Sail planned for early November; but it turned out the weather was grand, with high temperatures in the low 80’s and lows in the high 60’s—just lovey. Our winds ranged from 4 kts to around 14, and pretty much came from the northeast the whole trip. We had good winds for sailing at least part of each day, with a tendency for the lulls to occur around midday, but picking up again in the later afternoon. The crew included two experienced sailors both fresh from summer ASA 104 courses, and three “newbie” sailors, who recently did the club’s sailing course and had never been on a cruising sailboat before. The moderate winds were perfect for convincing them they could take the helm and practice tacking and jibing in the 35-foot Comfortably Numb. All was well as we anchored the first night off DeSoto Point close to the mouth of the Manatee River. Cooking preparations resulted in a marvelous feast complimented by red wine and cibiatta laced with our own roasted garlic. The next day we headed out for the gulf; but again the wind died midday, so we anchored for lunch off Egmont Key, then headed back to the Manatee River to dock at Twin Dolphins Marina in Bradenton. The wind picked up again about half way back across the bay, so we got some nice sailing in. After showers and dinner on shore, we had great sleeping weather; but fog in the morning. Heading back to St. Pete’s the weather followed the same pattern again, so we had some good sailing in the afternoon, and returned to the Vinoy Marina at exactly 1700. Comfortly Numb performed well, although we did have a couple of issues (like with the head and the main sail); but if we didn’t have any issues, it wouldn’t have been sailing…right? 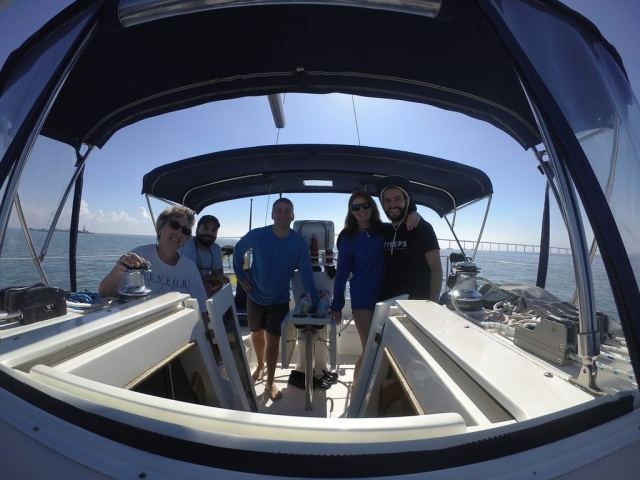 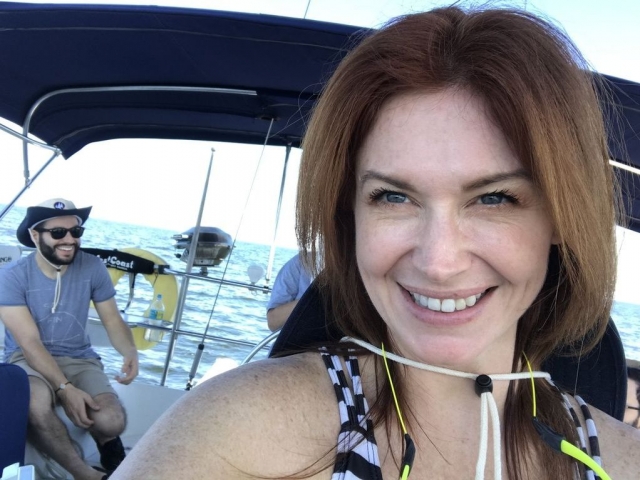 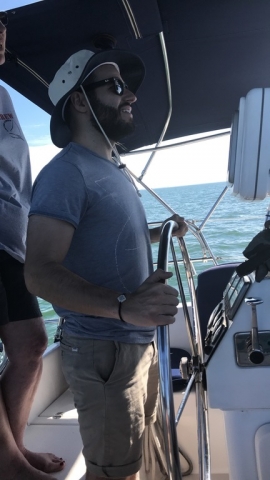 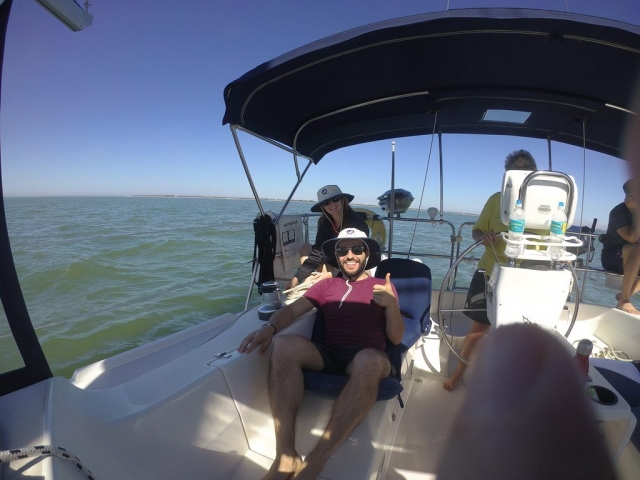 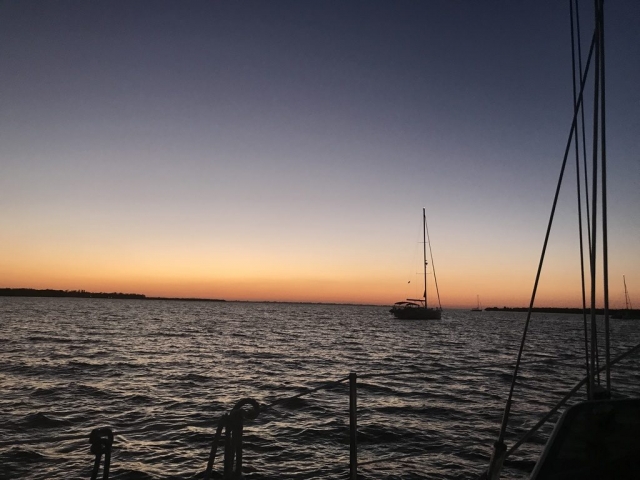 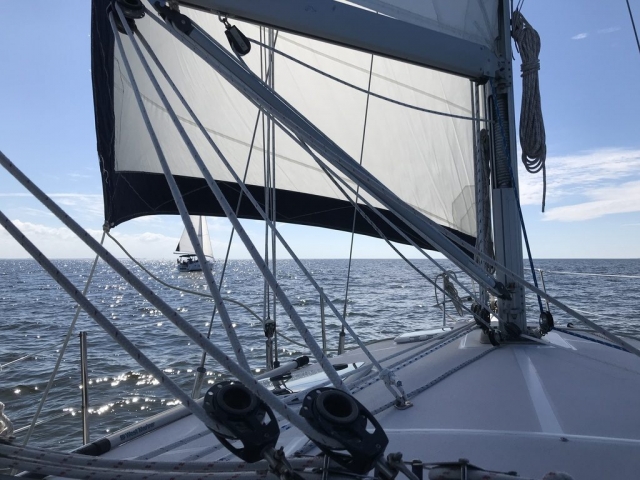 Sunday was a tremendous day for sailing!  With winds starting out around 14 knots and then settling in to around 10 for most of the race, you couldn’t ask for better conditions.  We had eleven sailors join us this time, including a couple rookies(Caroline and Andy) hiking out for their first race with the club.  There were no capsizes on the day and no fouls called.  Being the last race of the season, bragging rights for the next year were on the line.  In A Fleet, Kurt was trailing Rick by just four points coming in to the race.  As you’ll see below, there was a two way tie for first place on the day, and a three way tie for third place.  That means we had to dig in to the tie breaking rules.  With two first place finishes, Matt and Jesus win the tie vs Kurt and Caroline.  The cup for 2017 came down to a photo finish in this final race of the season, but of course we don’t have a photo to refer.  We think Kurt and Caroline edged out Rick, Natalie and Walter by a foot or two following a great comeback rounding the final mark.  That’s what the record will show.  It was a great 2017 season, and everyone is looking forward to 2018.  Stay on the lookout for Matt as he scored several first place finishes recently and is poised for a run at winning in 2018.

After an August race cut short by the doldrums and a September race cancelled all together by uninvited guest Hurricane Irma, The Sailing Club help it’s first full race since July. Our patience was rewarded with 8 – 10 knot winds and zero rain. Once again the point totals were extremely close, save for a malfunctioning Sunfish.

The June race was yet another close one with a tie for first place on the day in both fleets. Here are the final tally’s:

The June race began with all eyes on the horizon as thunderstorms were in the forecast.  There were three rookie racers on the water as well as five of the usual suspects.  It may have been the closest race in years with a three way tie for second place points and just two points separating first place.  Penny and Rick showed how important it is to keep accurate time.  After portsmouth corrections were applied, just one second separated second and third place.  Because of the looming storm, the second race was shortened to just one lap.  In a show of mercy, the rain arrived just as the gate was being locked up with all the boats properly stowed.  From there the post-race activities were moved to the pavilion over at the dog park.

Congratulations Brad, Alyssa, Maggie, Shea, James, Hector, Christine, Randal, Matt, Stacie, Rhonda and Kyle for completing the Community Sailing Program.  Good luck in your future sailing endeavors and we hope to see you back at the club. 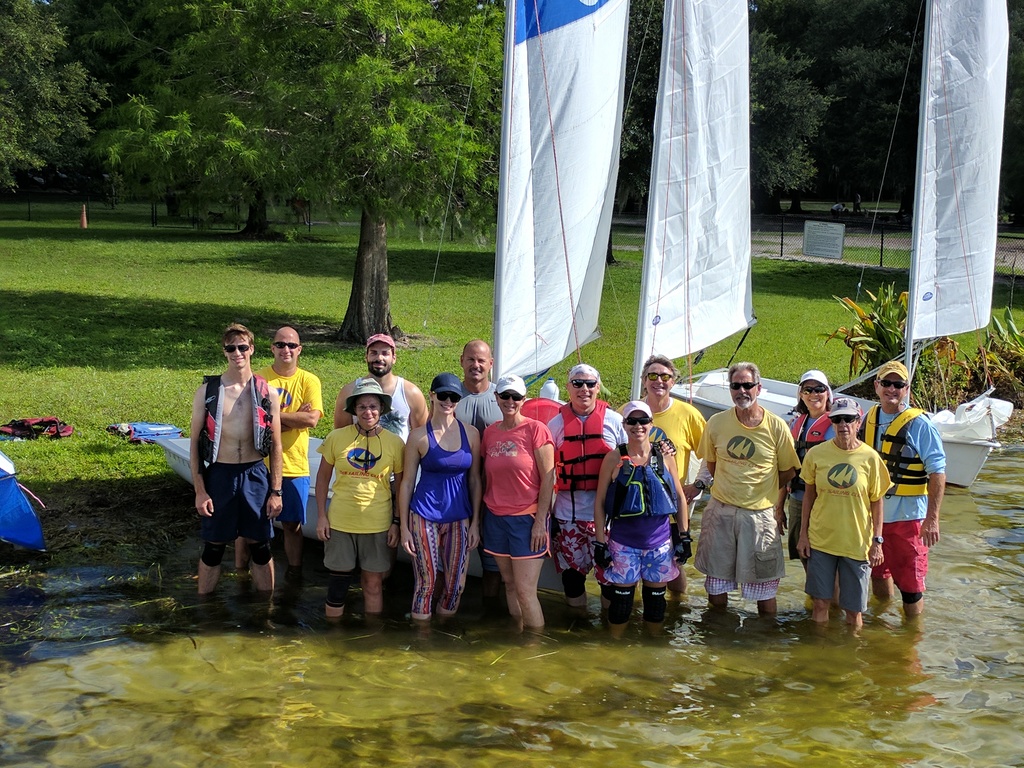 Congratulations to Emily, Jordan, Amanda, Paul, Alex, Chait, Fernando, Karen, Thomas, Scott and Jesus for completing the Community Sailing Program in May.  They had to deal with some pretty high winds, but everyone made it through and learned a lot. 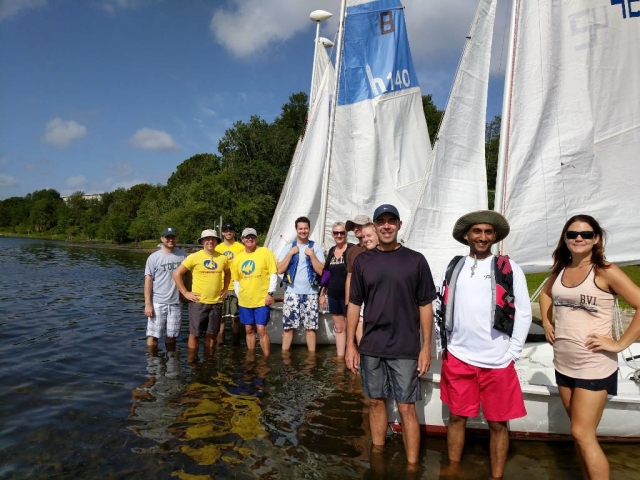